Various distribution tests have been proposed in the literature. Most employ the framework we describe below.

While coverage tests assess a value-at-risk measure’s exceedances data – αi, – α +1i, … , 0i, which is a series of 0’s and 1’s, most distribution tests consider loss data – αl, – α +1l, … , 0l. Although it is convenient to assume exceedance random variables tI are IID, that assumption is unreasonable for losses tL.

A value-at-risk measure characterizes a CDF

for each tL. Treating probabilities as objective for pedagogical purposes,

is a forecast distribution we use to model the “true” CDF for each tL, which we denote

Testing this hypothesis poses a problem: We are not dealing with a single forecast distribution modeling some single “true” distribution. The distribution changes from one day to the next, so each data point tl is drawn from a different probability distribution. This renders statistical analysis futile. We circumvent this problem by introducing a random variable tU for the quantile at which tL occurs.

, the tN are identically standard normal, tN ~ N(0,1), so transformed data –αn, –α+1n, … , 0n can be tested for consistency with a standard normal distribution.

Below, we introduce a simple graphical test of normality that can be applied. This will motivate a recommended standard test based on Filliben’s (1975) correlation test for normality. That is one of the most powerful tests for normality available.

Construct the tn as described above, and arrange them in ascending order. We adjust our notation, denoting n1 the lowest and nα+1 the highest, so n1 ≤ n2 ≤ … ≤ nα+1. Next, define

. We can test this by plotting all points (nj,

) in a Cartesian plane. If the points tend to fall near a line with slope one, passing through the origin, this provides visual evidence for our null hypothesis.

) as described above, and take the sample correlation of the nj and

. Sample correlation values close to one tend to support the null hypothesis. 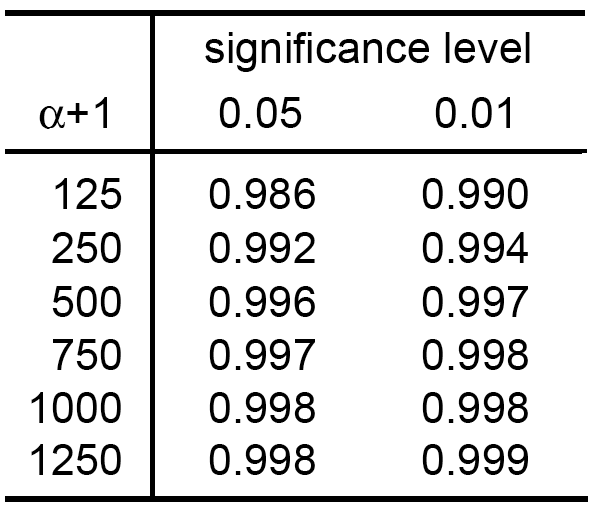 Suppose we are backtesting a one-day 99% value-at-risk measure based on α + 1= 250 days of data. We calculate the nj and

In applying our recommended standard distribution test with 750 days of data, the sample correlation of the nj and

is found to be 0.995. Do we reject the value-at-risk measure at the .05 significance level?
Solution