Christoffersen’s (1998) independence test is a likelihood ratio test that looks for unusually frequent consecutive exceedances—i.e. instances when both t–1i = 1 and ti = 1 for some t. The test is well known, since it was first proposed in an often-cited endorsement of testing for independence of exceedances.

Extending our earlier notation q* for the coverage of a value-at-risk measure, we define

) experience an exceedance in the previous period. Our null hypothesis

If a value-at-risk measure is observed for α + 1 periods, there will be α pairs of consecutive observations (t–1i, ti). Disaggregate these as

which would support our null hypothesis. We apply a likelihood ratio test as follows. Assuming

does hold, we estimate q* with

Our likelihood ratio is

and –2log(Λ) is approximately centrally chi-squared with one degree of freedom—that is –2log(Λ) ~ χ2(1,0)—assuming

For a recommended standard test, we assess the independence of the values tN obtained by applying the inverse standard normal CDF to the loss quantiles tU:

We adopt the null hypothesis that the autocorrelations

are all 0 for lags k = 1, 2, 3, 4 and 5. We test this hypothesis by calculating the sample autocorrelations of our data –mn, –m+1n, … , –1n for those same five lags. We take the maximum of the absolute values of the five sample autocorrelations. That is our test statistic. We reject the null hypothesis at the .05 significance level if the test statistic exceeds the non-rejection value indicated for sample size α + 1 in Exhibit 14.7. 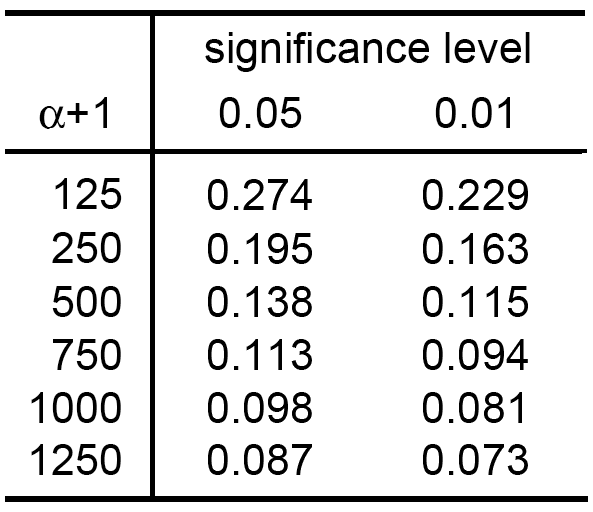 In Christoffersen’s 1998 independence test, α01 routinely equals α10. Why is this, and what would cause them to differ?
Solution

A value-at-risk measure is to be backtested using our recommended standard independence test and 500 days of data. Values tn are calculated, and their sample autocorrelations are determined to be 0.034, –0.078, –0.124, 0.107 and 0.029 for lags 1 through 5, respectively. Do we reject the value-at-risk measure at the .05 significance level?
Solution