Specifically, the first principal component D1 is defined as

The second principal component D2 is defined as

where v2 is selected from the set of all n-dimensional unit vectors that are orthogonal to v1 in such a manner as to maximize the variance of D2. This is achieved by setting v2 equal to the normalized second eigenvector of ΣZ —the eigenvector with the second largest eigenvalue. The variance of D2 equals that eigenvalue, λ2. 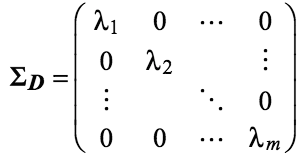 Consider a random vector Z with mean and covariance matrix