Consider a square matrix c. If

By inspection, a solution is ν = (−1, −3, 3). Obviously, any multiple of this is also a solution. We repeat the same analysis for the other eigenvalues. Results are indicated in Exhibit 2.7.

The approach we employed in our example is useful for deriving an important result. Consider an arbitrary n × n matrix c. To find its eigenvalues, we construct the determinant of (c − λI) and set it equal to 0. This results in an nth-order polynomial equation. By the fundamental theorem of algebra, it has n solutions. We conclude that every matrix has n eigenvalues. Of course, some may be complex. Others may be repeated. In practical applications, eigenvalues are not calculated in this manner. Although setting the determinant of (c − λI) equal to 0 and solving is theoretically useful, there are more efficient algorithms, which are implemented in various software packages. See Strang (2005).

Consider an intuitive example. A sphere of unit radius is positioned at the center of a three-dimensional coordinate system. It is rotating about the x3-axis. The matrix 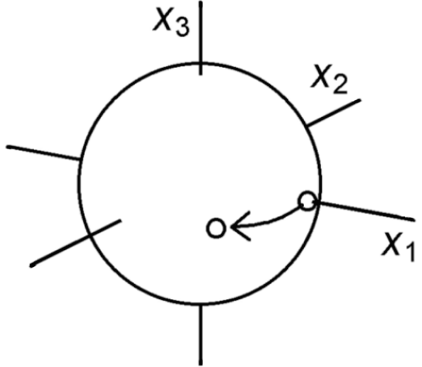 Intuitively, what might we expect to be an eigenvector of the matrix c? Is there a point on the unit sphere that a 45° rotation transforms into a multiple of itself? Of course! Consider the point at the north pole. It is the point (0, 0, 1), and it is transformed into itself. We conclude that an eigenvector of c is the vector (0, 0, 1). The corresponding eigenvalue is 1. Because it is a 3 × 3 matrix, c has two other eigenvalues, but they are both complex numbers.

Find the eigenvalues and eigenvectors of the matrix

Prove that the eigenvalues of a diagonal matrix are its diagonal elements.
Solution

Use one of the stated properties of eigenvalues to prove that a matrix is singular if and only if it has 0 as one of its eigenvalues.
Solution