of a specified form. Key vector 1R is unaffected. This is illustrated schematically as 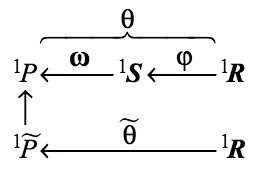 is constructed. We may speak of interpolated, least squares, gradient, or gradient-Hessian remappings.

is to have a nonlinear polynomial form and the dimensionality of 1R is high, constructing

In the quadratic case, c has

unique components. Assigning all of these values can be computationally expensive if n is large, so it is worth limiting the generality of a quadratic form where possible. This is done by fixing certain components ci, j and bi equal to zero in advance.

Selecting which components to assign nonzero values requires experience and some experimentation. It is often reasonable to model all bi terms and the single a term. Deciding which diagonal terms ci,i to model is a question of which key factors contribute significantly to nonlinearity. In an options portfolio, these are the key factors for the options’ underliers. You might also permit nonzero diagonal coefficients ci,i for key factors representing implied volatilities, although these are less significant. Usually, most or all off-diagonal terms ci, j can be set equal to 0.