Often a portfolio has active holdings ωi in numerous assets, but many of those assets are similar to each other. Two cash flows may be due 500 and 501 actual days from today. Technically, they represent distinct assets, but the two entail almost identical market risks. Two call options may both expire in 6 months. They both have the same underlier, but one is struck at 100 and the other is struck at 102.5. They represent distinct assets, but from a risk standpoint, they are similar.

with only a handful. The result is a portfolio mapping function

φ that, with fewer active holdings, can be valued more rapidly than the original mapping function θ = ω

φ. Schematically, a holdings remapping has the form 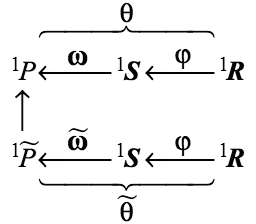 Note that, while θ is replaced by

in the remapping, 1R remains unchanged. We seek holdings remappings such that:

Holdings remappings are most attractive in situations where asset mappings 1Si = φi (1R) are complicated, making individual assets computationally expensive to value. This is often the case with exotic derivatives or mortgage-backed securities. Nevertheless, holdings remappings are used in a variety of situations. The following example illustrates concepts in the simple context of fixed cash flows.