Today, the most widely used pseudorandom number generators are linear congruential generators (LCGs). Introduced by Lehmer (1951), these are specified with nonnegative integers η, a, and c.13 An integer seed value z[0] is selected, 0 ≤ z[0] < η, and a sequence of integers z[k] is obtained recursively with the formula

The modular notation “mod” indicates that z[k] is the remainder after dividing the quantity a z[k–1] + c by η. A sequence of pseudorandom numbers u[k] is obtained by dividing the z[k] by η:

Starting with a seed z[0] = 4, we calculate a sequence of pseudorandom numbers in Exhibit 5.9. 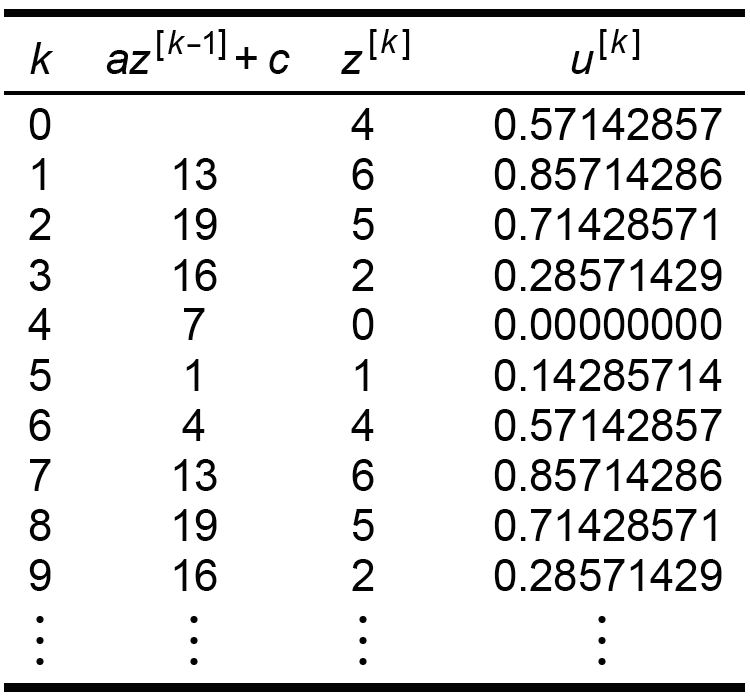 A lattice structure may or may not be a problem, depending upon how closely the planes are spaced and the nature of the intended Monte Carlo application. Exhibit 5.10 illustrates two-dimensional lattice structures for two LCGs. Because they have low periods, neither of these generators would be used in practice, but they illustrate how lattice structures can vary from very good to very bad.

This was widely adopted during the 1960s because computer implementations of the generator ran quickly. Division by 231 was easy on binary computers just as division by 100 is easy with decimal numbers. A simple trick made it easy to multiply by 65,539. Unfortunately, RANDU was a mistake. We know today that its two-dimensional lattice is good, but not its three-dimensional lattice. All 3-tuples generated by RANDU fall on just 15 parallel planes. This discovery cast doubt on Monte Carlo results obtained during the 1960s and 1970s with this generator.

Another issue with LCGs is the fact that correlations between pseudorandom numbers separated by large lags may be strong.

A number of LCGs have been adopted as default generators in various operating systems and software packages. An example is the LCG

This was first proposed by Lewis, Goodman, and Miller (1969) for the IBM System/360. Based upon its performance on empirical tests as well as its ease of implementation, Park and Miller (1988) proposed it as a minimal standard against which other generators might be compared. This LCG was incorporated into operating systems for personal computers and Macintosh computers, as well as the IMSL subroutine library, MATLAB, and a number of simulation packages. Exhibit 5.11 illustrates a sample of 2-tuples from the generator as well as its two-dimensional lattice structure.

Exhibit 5.11: The left chart illustrates 1000 points (x[2k], x[2k+1]) formed from 2000 consecutive numbers generated with [5.14] using seed 1234. The right chart shows the lattice structure of all points (x[k], x[k+1]), within the indicated region, for the same generator. The lines appear vertical, but are actually tilted slightly to the right. Note the change of scale in the right chart.