More than 200 years before Metropolis coined the name “Monte Carlo method,” George-Louis Leclerc (Comte de Buffon) communicated several problems to the Academy of Sciences in Paris, including the following.7 If a needle of length l is dropped at random on the middle of a horizontal surface ruled with parallel lines a distance d > l apart, what is the probability that the needle will cross one of the lines? Today, this is known as the problem of Buffon’s needle. To solve it, consider Exhibit 5.1.

Exhibit 5.1: To derive the probability of a needle crossing a line, we describe the positioning of the needle relative to nearby lines with a random vector that has components a ∈ [0,d) and θ ∈ [0,π).

The positioning of the needle relative to nearby lines is described by a random vector with components a ∈ [0,d) and θ ∈ [0,π). The random vector (a, θ) is uniformly distributed on the region [0,d) × [0,π). Accordingly, it has PDF

Let X be a random variable for the number of lines crossed in a single drop of the needle. With d > l, a line will be crossed if and only if a < l sin(θ), so we have:

In this solution, Pierre-Simon Laplace perceived8 an amusing, if inefficient, means of approximating the number π. Suppose Buffon’s experiment is performed with m tosses of the needle. During those tosses the needle is observed to cross a line C times. We have

In 1864, Captain O. C. Fox performed this experiment three times to occupy himself while recovering from wounds.9 His results are shown in Exhibit 5.2. 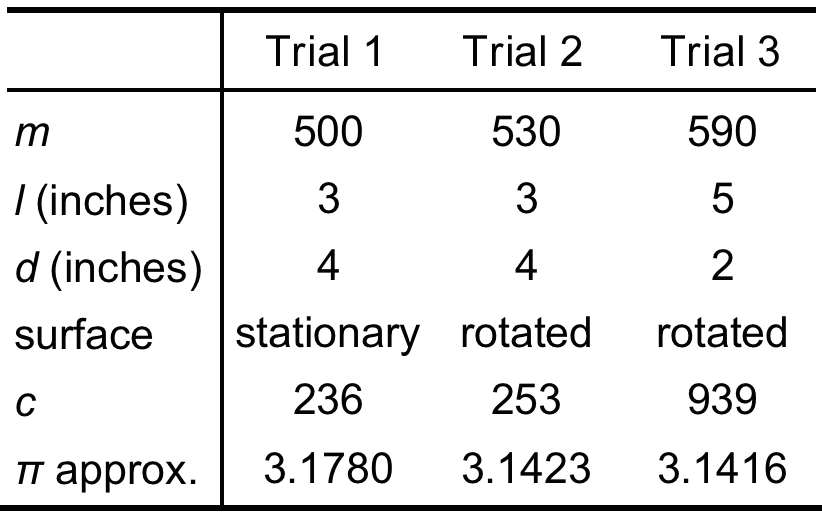