Good notation is more than a convention. It shapes how we think, streamlines problem solving, avoids misunderstandings and facilitates communication. Nowhere was this more evident than the introduction of Hindu-Arabic numerals into Europe during the Middle Ages. Because they made arithmetic computations so easy, the new numerals supplanted both Roman numerals and the abacus, which had been widely used in Europe. Another example comes from calculus. While Newton and Leibniz disputed who discovered the fundamental theorem of calculus, there is no dispute as to whose notation was superior. We still use Leibniz’s notation today.

One of the contributions of this book is consistent notation for expressing ideas related to value-at-risk. Once you master the notation reading the book, I encourage you to keep using it. The notation will guide your thinking and help you avoid pitfalls.

Value-at-risk draws on many branches of mathematics. Each offers its own notation conventions. Because these conflict, it is impossible to observe them all simultaneously. But the book’s notation consistently presents financial concepts related to calculus, linear algebra, probability, statistics, time series analysis, and numerical methods, drawing on existing conventions where possible.

Components of vectors or matrices are distinguished with subscripts. Consider the random vector

Time also enters the equation. To avoid confusion, I do not indicate time with subscripts. Instead, I use superscripts that precede the rest of the symbol. For example, the Australian dollar Libor curve evolves over time. We may represent its value at time t as 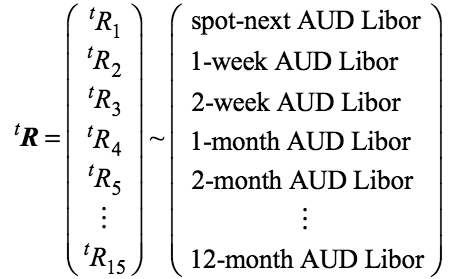 The value at time 3 of 1-month AUD Libor is

The entire curve at time 1 is denoted 1R. The univariate stochastic process representing 1-week AUD Libor over time is represented R2. The 15-dimensional stochastic process representing the entire curve over time is denoted R. Time 0 is generally considered the current time. At time 0, current and past Libor curves are known. As nonrandom vectors, they are represented with lowercase bold letters:

If time is measured in days, yesterday’s value of 12-month AUD Libor is denoted

Much other notation is standardized, as will become evident as the book unfolds. Some frequently occurring notation is summarized below.

Currencies are indicated with standard codes: 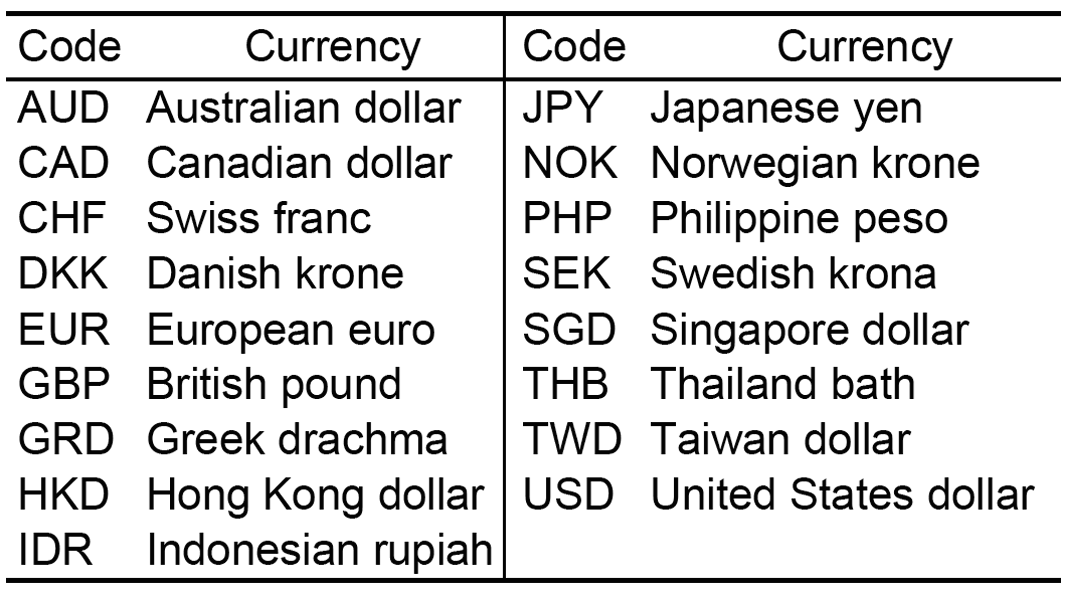 Where applicable, millions are indicated as MM. For example, 3.5 million Japanese yen is indicated JPY 3.5MM.

Exchange rates are indicated as fractions, so an exchange rate of 1.62 USD/GBP indicates that one British pound is worth 1.62 US dollars.

Acronyms used include those shown in Exhibit 0.2.