A stochastic process is said to be regime-switching if its behavior is determined by different models—different regimes—during different periods. We are interested in processes that switch randomly between regimes.

Consider an n-dimensional white noise W constructed with m joint-normal regimes. Let stochastic process Z indicate the regime in force at any time t, so terms tZ are random variables taking on values in the set {1, 2, … , m}. Z  has constant probabilities of switching from one regime to another at ay time t. These transition probabilities are indicated with a matrix:

Component pi,j indicates the probability of transitioning from regime j in force at any time t – 1 to regime i at time t. Each column sums to 1. At any time t – 1, the regime that will be in force at time t is uncertain, so tW is conditionally mixed joint-normal,

Exhibit 4.18 indicates a realization of the univariate three-regime process 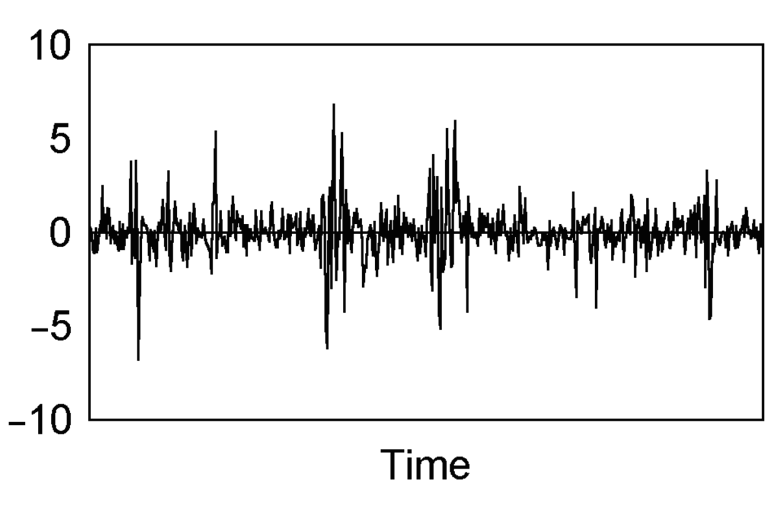 See Goldfeld and Quandt (1973) and Hamilton (1993) for estimation techniques.

Regime-switching models offer an alternative to GARCH processes for modeling conditional heteroskedasticity. In the multivariate case, covariance matrices directly specify any relationship between correlations and standard deviations. As dimensionality n increases, the number of parameters that must be specified for a completely general model becomes unmanageable. Research is ongoing.