Suppose random vector X is singular with covariance matrix Σ. There exists a row vector b ≠ 0 such that bΣb′ = 0. Consider the random variable bX. By [3.28],

Since our random variable bX has 0 variance, it must equal some constant a. This argument is reversible, so we conclude that a random vector X is singular if and only if there exists a row vector b ≠ 0 and a constant a such that

Dispensing with matrix notation, this becomes

Since b ≠ 0, at lease one component bi is nonzero. Without loss of generality, assume b1 ≠ 0. Rearranging [3.37], we obtain

If one component of X is a linear polynomial of the rest, then all realizations of X must fall in a plane within

n, where m < n. This is illustrated with realizations of a singular two-dimensional random vector X in Exhibit 3.6. 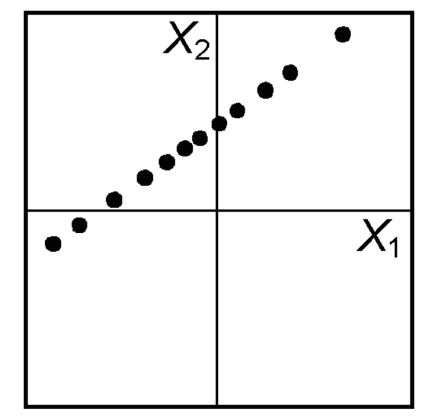 If a random vector X is singular, but the plane it sits in is not aligned with the coordinate system of

n, we may not immediately realize that it is singular from its covariance matrix Σ. A simple test for singularity is to calculate the determinant |Σ| of the covariance matrix. If this equals 0, X is singular. Once we know that X is singular, we can apply a change of variables to eliminate extraneous components Xi and transform X into an equivalent m-dimensional random vector Y, m < n. The change of variables will do this by transforming (rotating, shifting, etc.) the plane that realizations of X sit in so that it aligns with the coordinate system of

n. Such a change of variables is obtained with a linear polynomial of the form

We note that Σ has determinant |Σ| = 0, so it is singular. We propose to transform X into an equivalent two-dimensional random vector Y using a linear polynomial of the form [3.39]. For convenience, let’s find a transformation such that Y will have mean vector 0 and covariance matrix I:

so we seek a factorization ΣX = kk′. Applying the Cholesky factorization and discarding an extraneous column of 0’s, as described in Section 2.7, we obtain

Accordingly, our transformation is

Exhibit 3.7 illustrates how this change of variables transforms the plane in which X sits so that it aligns with the coordinate system of

Exhibit 3.7: Our change of variables transforms the plane that realizations of X sit in so that it aligns with the coordinate system of

2. The third extraneous component of X “drops out.”

Below are described four three-dimensional random vectors: W, V, X, and Y. Assuming their second moments exist, which of the random vectors has a singular covariance matrix?

Transform X into an equivalent two-dimensional random vector Y with mean vector 0 and covariance matrix I: