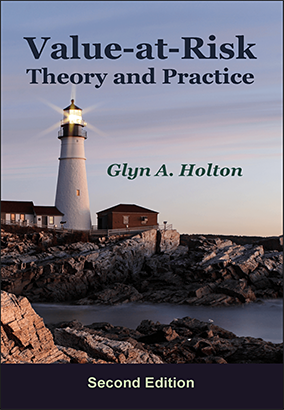 A Monte Carlo estimator need not employ a Un((0,1)n) sample. We saw this in Section 5.2.3 where we estimated the variance of a random variable Y that was a function of an N(0,1) random variable X. For that example, it was computationally convenient—and intuitively appealing—to directly model a realization {x[1], x[2], … , x[m]} of a sample {X[1], X[2], … , X[m]} for the non-uniform random variable X. Another example was in Section 1.7.4, where we used the Monte Carlo method to estimate thevalue-at-risk of a portfolio. There, we directly modeled a realization {1r[1], 1r[2], … , 1r[m]} of a sample {1R[1], 1R[2], … , 1R[m]} for 1R. Because they directly model relevant random vectors, such analyses are sometimes called simulations—Monte Carlo simulations.

Mathematically, such estimators are no different from the crude Monte Carlo estimator [5.34]. They simply incorporate a change of variables. As the intuitive nature of our earlier examples illustrates, such changes of variables can simplify problems that are inherently probabilistic.

Consider an n-dimensional random vector X with PDF ϕ. We need to calculate the expected value of E(q(X)) for some function q:

To estimate the integral with the crude Monte Carlo estimator [5.34], we must convert the area of integration from

n. By change of variables formula [2.168], the integral becomes

This change of variables can be accomplished with any differentiable function g: (0,1)n →

n, but suppose we employ a function g that is probability preserving in the sense defined earlier in this section. Two things happen. First, it can be shown that